I was browsing through forums on the Sales Enablement Society’s website recently when one thread stuck out to me. It mentioned “roasting a prospect’s pain points” as a sales tactic — making them laugh at a common frustration, and opening the door to a conversation.

This definitely wasn’t what I expected to see when reading up on sales enablement, so I wanted to know more. Tracking down the author of the thread, I read up about Jon Selig and his “Comedy Writing for Sales Teams” workshops. His clients include Citrix, Zoho CRM, Georgia-Pacific, and Microsoft Canada. Here’s a video showing how he trains teams in sales prospecting techniques using humor — designing well-crafted jokes that specifically appeal to both the target prospect, and problem the sales rep hopes to solve for them:

I sat down with Jon for an interview to explore this. It’s not a question of simply telling a joke, or treating anything about the sales process without the seriousness it deserves. Instead, this is a different lens on how we think about our packaging and delivery, a way of showing we “get” our customers. And it’s a tactic that certain product marketers may think about to give enablement efforts a different twist.

Here’s what I learned about how humor factors into the process, and 7 ways that product marketers can think about this as we work to enable our teams.

The video shows a few good scenarios of how this works, and here’s another example. A rep selling a sales training bootcamp package calls or sends a LinkedIn InMail with something like:

Listing three problems that drive sales executives crazy, this opening pitch grabs their attention. While their initial reaction might have to hang up or hit delete as fast as possible, this sparks a reaction of “That’s so true!” :joy:. With a chuckle, suddenly the rep has their attention and showed that they actually “get them” by zooming in on exact problems they struggle with. The door is cracked open, with a warmed-up prospect knowing they’re dealing with someone on common ground.

Part art, part science — there’s a lot of implications for marketing and sales in this.

The link between cold calling and standup comedy.

I asked Jon where he got this idea from. And it all started out from what he learned early on in cold-calling.

Tasked with selling ERP software at Oracle, he noticed that a well-placed joke not only broke the ice, but helped him more book meetings. Going beyond asking thought-provoking questions (a common cold-calling technique), when a laugh was thrown in the mix it hooked the prospect’s attention even more. Plus, the dominant thinking of sales and marketers is that pain points should be approached with reverence — with solutions cast almost in a savior role. In other words, super serious, and mind-numbingly repetitive when everyone’s pitching that way too. But it turns out: pain points can be framed in more than one way. And while there’s no doubt a prospect’s challenges are indeed serious, well-applied humor could be a powerful lens to show empathy. For breaking through to people, poking fun at the things they struggle with can be a way to stand out and get heard.

Later on, his “a-ha!” moment came when taking a standup comedy class. He saw the overlap in cold calling and standup, and sums up why with a quote from Chorus.ai CEO Roy Raani: “You have 20 seconds to earn another 20 seconds”. More than that and they’ll tune out, so grab them quickly, and they’ll stay with you. It takes saying something unique, and insightful — precisely the same challenge faced by sales.

Meaning for marketers, and enablement?

For me this was truly eye-opening. Product marketers are always thinking about pain points, and connecting what we offer as an antidote. It never occurred to me to flip the lens on this and show that we not only “get” it — but we get it so well that we can land a zinger about it too.

What would your sales team say if your next training session agenda included jokes for prospecting?

From Just-Add-Water email punchlines, playbooks with a joke as the opening line…it’s almost hard to imagine. But it’s also a new way of approaching sales training, encouraging reps to build rapport through less formal interactions.

Here’s what Microsoft Canada had to say after their workshop with Jon:

Granted, this won’t work for everyone and needs to be considered carefully in the context of a wider enablement strategy as well as brand voice. But for increasingly cutthroat industries with ever more savvy buyers, maybe it’s an edge that could make the difference?

Let’s break down the top 7 takeaways for what this can mean for enablement.

This isn’t about simply telling a joke. It has to be super-relevant, founded on a deep understanding of the professional world that person lives in. Just like any marketing message, it needs to resonate with that persona. Without this, you’re defeating the purpose of using humor to appeal to their needs. (Cue images of sleazy salespeople that just don’t get it).

As far as landing the joke, you might even want to host a remote workshop where your team is actually trained in how to do it right. Jon’s workshops show how to craft these jokes, focusing on timing and delivery that get punchlines to land. I asked about people who aren’t naturally funny (moi!) and his take is that telling one joke well is a learned skill anyone can pick up.

Probably the single biggest value-add of this approach is grabbing attention. Instead of yet another same-old story, you’ve said something different. Less ignorable, you now have your 20 seconds to get through with your next point about how you can really help with something they need.

Expanding on #1, when you’ve managed to be truly on-point in referencing something meaningful to that person’s world, you’ve passed the first hurdle of relevance. Then if you can quickly follow with a way to solve a real issue they’re struggling with that will make their lives better, you’re on solid footing for a focused conversation.

How many LinkedIn InMails have we received promising to “Transform our [fill in the blank]?” Or use a tool to “Be the company you want to be?” Aspirational language that might have resonated once but is now starting to all sound the same. But when something different arrives, packaged up in a humorous way that still smart and hits the target, now you take notice. Standing out can be the way to getting the “in.”

One of the tenets of humor is to disrupt the frame of reference of the listener. It’s a concept many tap into for graphics or advertising, flipping the script of what the person would expect to hear. By surprising a prospect with something other than yet another dead-serious “Your business will become obsolete if you don’t act now” message, it might just be the twist that gets them to consider what you’re saying — rather than dismiss it outright.

Sometimes, this tactic provokes a response where they unload everything you ever needed to know about this frustration. Like a therapy session, now you’re connecting with them around how frustrating scenario x is…warming up ears that may be open to a new way forward.

We’ve all heard the stats about how today’s buyer is better informed, and goes through a multi-stage journey across many touchpoints long before even talking to a rep. Everyone’s searching for new tactics to influence where that journey heads next. Against that, could humor be an under-utilized tactic to make touchpoints along the way more impactful, higher value-add across each step? Could they be a key to shortening that journey, reducing the amount of touches needed to break through? These aren’t easy questions, don’t boil down to a single answer. But in this complex buying world we live in, it certainly doesn’t hurt to have another communication method in our toolkit to wield where it makes sense.

The conversation with Jon was fascinating.

For product marketers tasked with sales enablement, humor certainly isn’t the first tactic to come to mind. But this left me thinking through where and how it could factor in, and be meaningful. It’s something different for sure. When applied with precision, perhaps it’s a unique weapon to slice through and actually reach people. Just like humor does in real life: sparking a reaction, making us open up. Plus today, with buyers more educated than ever, finding new ways to compete and show that we “get it” has never been more important.

Next steps for me? Where I’m at now is placing a mental note in my head to consider humor in the future. As I write messaging matrices, craft a JAW email, or think about the training I could help my sales team with, I’ll be on the lookout for where and how humor could help advance those goals. Then try my hand at crafting a joke and see where it takes me. At worst, if nothing else I’ll enjoy having a chuckle while I try it out. Better yet, I might land on an opening line to a future deal.

What do you think? Shoot me a note on LinkedIn with your take. 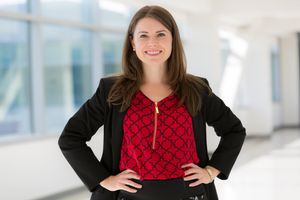 Using my voice and love of communications to discover, inspire, & make an impact. Product marketer focused on emerging tech reshaping our world. Writer/editor for Medium "We Are Product Marketing"